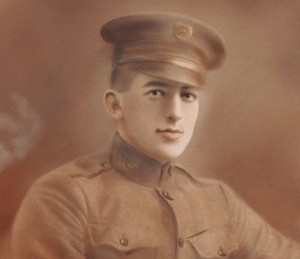 With 3/4 of the 339th Infantry Regiment being from the Detroit Michigan area, they began to call themselves “Detroit’s Own.” However, soon after spending some time near the Arctic Circle, they changed their nickname to “The Polar Bears,” due to the extreme nature of the brutal temperatures they had to serve and fight in, temperatures sometimes reaching 60 degrees below zero.

The North Russian Expeditionary Force assisted the “White Russians,” loyal to the deposed Russian Czar Nicholas, in their futile Civil War against the revolutionary “Red Russians” or Communist Forces.

Homer Wing himself was involved in severe action in late September, early October 1918, against the “Bolo’s,” which was the nickname given to the Communist Bolshevik Army they faced. It was during the month of May 1919, that the American Force’s and Homer Wing were finally called home.

Unfortunately, as “The Polar Bears” were withdrawing their forces from the region, twenty-five year old Homer Wing was accidently killed in a railroad incident. His body was shipped home to Rochester in November 1919, and is interred in the town’s Mt Avon Cemetery.

During the afternoon of November 17th 1919,  businesses and schools in Rochester and Avon Township closed down to commemorate Homer’s return. They did so with a parade in which 30 members of the local American Legion Post marched in his honor.